Tablet to The Hague 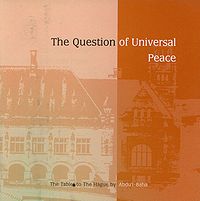 The Tablet to The Hague is a letter which `Abdu'l-Bahá wrote to the Central Organisation for Durable Peace in The Hague, The Netherlands on 17 December 1919.

It was delivered in person by Ahmad Yazdání and Hand of the Cause Ibn-i-Asdaq in 1920.[1]

In the tablet, `Abdu'l-Bahá gives an overview of Bahá'í principles, which include the following:

He declares that the League of Nations is "incapable of establishing universal peace", and calls for the establishment of a Supreme Tribunal, representing all countries: