Religion Wiki
Register
Don't have an account?
Sign In
Advertisement
in: Episcopacy in Roman Catholicism, Episcopacy in Anglicanism, Headgear,
and 4 more
English

View source
This article is about religious headgear. For other uses, see Mitre (disambiguation).

The mitre (sometimes also spelled miter), from the Greek μίτρα, 'headband' or 'turban', is a type of headgear now known as the traditional, ceremonial head-dress of bishops and certain abbots in the Catholic Church, as well as in the Anglican Communion, some Lutheran churches, and also bishops and certain other clergy in the Eastern Orthodox churches, Eastern Catholic Churches and the Oriental Orthodox Churches.

In ancient Israel, the Kohen Gadol (High Priest) wore a headress called the Mitznefet (often translated into English as "mitre"), which was wound around the head so as to form a broad, flat-topped turban. Attached to it was the Tzitz, a plate of solid gold bearing the inscription "Holiness to YHWH"[1] (Exodus 39:14, 39:30).

The camelaucum (Greek: καμιλαύκιον, kamilaukion), the headdress both the mitre and the Papal tiara stem from, was originally a cap used by officials of the Imperial Byzantine court. "The tiara [from which the mitre originates] probably developed from the Phrygian cap, or frigium, a conical cap worn in the Greco-Roman world. In the 10th century the tiara was pictured on papal coins."[2] Other sources claim the tiara developed the other way around, from the mitre. Its use has possible precedents in the Phrygian mithraic sacrifice and the mitre-like headdress signifying enlightenment and received at a priest's inauguration.[3] In the late Empire it developed into the closed type of Imperial crown used by Byzantine Emperors (see illustration of Michael III, 842-867).

In Western Europe, the mitre was first used in ancient Rome by the Salii and other priests, and outside of Rome about the year 1000. Worn by a bishop, the mitre is depicted for the first time in two miniatures of the beginning of the eleventh century. The first written mention of it is found in a Bull of Pope Leo IX in the year 1049. By 1150 the use had spread to bishops throughout the West; by the 14th century the tiara was decorated with three crowns.

In its modern form in Western Christianity, the mitre is a tall folding cap, consisting of two similar parts (the front and back) rising to a peak and sewn together at the sides. Two short lappets always hang down from the back.

In the Catholic Church, the right to wear the mitre is confined by Canon law to bishops and to abbots, as it appears in the ceremony of consecration of a bishop and blessing of an abbot. Cardinals are now normally supposed to be bishops (since the time of Pope John XXIII), but even cardinals who are not bishops and who have been given special permission by the pope to decline consecration as bishops may wear the mitre. Other prelates have been granted the use of the mitre by special privilege, but this is no longer done. Former distinctions between "mitred abbots" and "non-mitred abbots" have been abolished.

Three types of mitres are worn by Roman Catholic clergy for different occasions:

The proper color of a mitre is always white, although in liturgical usage white also includes vestments made from gold and silver fabrics. The embroidered bands and other ornaments which adorn a miter and the lappets may be of other colors and often are. Although colored miters are sometimes sold and worn at present, this is probably due to the maker's or wearer's lack of awareness of liturgical tradition.

On formal occasions, an altar server may wear a shawl-like veil, called a vimpa, around the shoulders when holding the bishop's mitre. The vimpa is used to hold the mitre so as to avoid the possibility of it being soiled by the natural oils in a person's hand.

With his inauguration as pope, Benedict XVI broke with tradition and replaced the papal tiara even on his papal coat of arms with a papal mitre (containing still the three levels of 'crowns' representing the powers of the Papacy in a simplified form) and pallium. Prior to Benedict XVI, each pope's coat of arms always contained the image of the papal tiara and St. Peter's crossed keys, even though the tiara had fallen into disuse, especially under popes John Paul I and John Paul II. Pope Paul VI was the last pope to date to begin his papal reign with a formal coronation in June 1963. However, as a sign of the need for greater simplification of the papal rites, as well as the changing nature of the papacy itself, he abandoned the use of his tiara in a dramatic ceremony in Saint Peter's Basilica during the second session of Vatican II in November 1963. However his 1975 Apostolic Constitution made it clear the tiara had not been abolished: in the constitution he made provision for his successor to receive a coronation. Pope John Paul I, however, declined to follow Paul VI's constitution and opted for a simpler papal inauguration, a precedent followed by his two successors. Pope John Paul II's 1996 Apostolic Constitution left open several options by not specifying what sort of ceremony was to be used, other than that some ceremony would be held to inaugurate a new pontificate.

Pope Paul VI donated his tiara (a gift from his former archdiocese of Milan) to the efforts at relieving poverty in the world. Later, Francis Cardinal Spellman of New York received the tiara and took it on tour of the United States to raise funds for the poor. It is on permanent view in the Crypt Church in the Basilica of the National Shrine of the Immaculate Conception in Washington, D.C.

In the Church of England the mitre fell out of use after the Reformation, but was restored in the late 19th and early 20th centuries as a result of the Oxford Movement, and is now worn by most bishops of the Anglican Communion on at least some occasions.

The most typical mitre in the Eastern Orthodox and Eastern Catholic churches is based on the closed Imperial crown of the late Byzantine Empire. Therefore, it too is ultimately based on the older καμιλαύκιον although it diverged from the secular headdress at a much later date, after it had already undergone further development. The crown form was not used by bishops until after the fall of Constantinople (1453).

The Eastern mitre is made in the shape of a bulbous crown, completely enclosed, and the material is of brocade, damask or cloth of gold. It may also be embroidered, and is often richly decorated with jewels. There are normally four icons attached to the mitre (often of Christ, the Theotokos, John the Baptist and the Cross), which the bishop may kiss before he puts it on. Eastern mitres are usually gold, but other liturgical colours may be used.

The mitre is topped by a cross, either made out of metal and standing upright, or embroidered in cloth and lying flat on the top. In Greek practice, the mitres of all bishops are topped with a standing cross. The same is true in the Russian tradition. Mitres awarded to priests will have the cross lying flat. Sometimes, instead of the flat cross, the mitre may have an icon on the top.

As an item of Imperial regalia, along with other such items as the sakkos (Imperial dalmatic) and epigonation, the mitre came to signify the temporal authority of bishops (especially that of the Patriarch of Constantinople) within the administration of the Rum millet (i.e., the Christian community) of the Ottoman Empire. The mitre is removed at certain solemn moments during the Divine Liturgy and other services, usually being removed and replaced by the protodeacon.

The use of the mitre is a prerogative of bishops, but it may be awarded to archpriests, protopresbyters and archimandrites. The priestly mitre is not surmounted by a cross, and is awarded at the discretion of a synod of bishops.

Oriental Orthodox bishops sometimes use mitres, either of the Western or Eastern style. In the past, Coptic bishops have worn the ballin, an omophorion wound around the head like a turban. The Coptic Patriarch of Alexandria will often wear an Eastern-style mitre. Coptic priests frequently wear a mitre, similar to a Western bishop's mitre.

Syriac Orthodox bishops wear the maşnaphto (literally, 'turban') when presiding at the Divine Liturgy. This is a large, richly embroidered hood, often depicting the Holy Spirit as a dove.

Armenian Apostolic bishops wear tall and distinctively tapered Western-style mitres. The Armenian bishop's mitre differs from its Western counterpart in that the points at the top are usually joined together. Armenian priests regularly wear Byzantine-style mitres (symbolyzing the sovereignty of Christ). On certain solemn occasions, Armenian deacons will wear the mitre also, although the deacon's mitre is somewhat narrower than that of the priest.

During the 18th and 19th Centuries, soldiers serving as grenadiers in various northern European armies wore a mitre similar to those worn by Western bishops, but made out of metal rather than fabric. The mitre survived as parade dress in a few Prussian and Russian grenadier regiments until World War I.

The bishop in the board game chess is represented by a stylized Western mitre.

The crowns of the Austrian Empire and Imperial Russia incorporated a mitre of precious metal and jewels into their design. The Austrian imperial crown was originally the personal crown of the Holy Roman Emperor Matthias II (1612–19) and has the form proper to that of a Holy Roman Emperor. At their coronations as Roman Emperors in Rome the pope placed a miter on their heads before placing the crown over it. Their empress consorts also received both a miter and crown on their heads from a cardinal bishop at the same ceremony. The form of the Russian imperial crown dates back to the time of Peter the Great’s early attempts to westernize Russian and was probably inspired by the crowns worn by Austrian Hapsburg emperors.

Abbesses of certain very ancient abbeys in the West also wore miters, but of a very different form than that worn by male prelates. These miters probably had their origins in the caps worn deaconesses in the early church, since at the time these abbeys the order of deaconesses still existed in the West and the abbess foundresses of these monasteries were deaconesses.

The mitral valve of the human heart, which is located between the left atrium and the left ventricle, is named so because of its similarity in shape to the mitre. Andreas Vesalius, the father of anatomy, noted the striking similarity between the two while performing anatomic dissections in the sixteenth century. 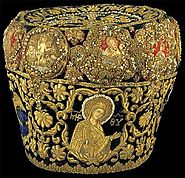 Mitre of Orthodox Metropolitan Chrysostomos of Smyrna, killed when the Turks captured the city in 1922.
National Historical Museum, Athens, Greece. 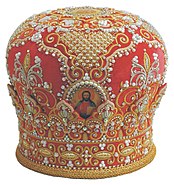 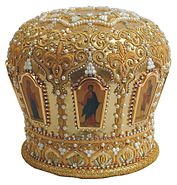 Bishops of the Armenian Catholic Church in Jerusalem

Abbot's mitre, treasury of the former Premonstratensian Abbey in Rüti ZH in Switzerland