Religion Wiki
Register
Don't have an account?
Sign In
Advertisement
in: Seats, Church architecture, Liturgy of the Hours,
and 4 more
English

View source
This article is about the church ornament. For the weapon, see Misericorde (weapon).

A misericord (sometimes named mercy seat like the Biblical object) is a small wooden shelf underneath folding seats in churches installed to provide some level of comfort for those standing during long periods of prayer.

Prayers in the early medieval church for the daily divine offices (Matins, Lauds, Prime, Terce, Sext, None, Vespers, and Compline) were said standing with uplifted hands. Those who were old or infirm could use crutches or, as time went on, misericordia (literally "act of mercy"). Seating was constructed so that the seats could be turned up, the undersides being provided with a small shelf thus allowing a person a small level of comfort by leaning against it. Like most other medieval woodwork in churches, they were usually carved with skill and often show detailed scenes which belie their hidden position underneath the seats, specially in the choir stalls of the quire around the altar.

Misericords in English churches date from the start of the thirteenth century right up until the twenty-first century, although after the beginning of the seventeenth century they are viewed as modern copies with little or no historical importance. Remnant's 1969 catalogue dismisses everything after this date as "modern", rarely even affording it a description, but there are many wonderful carvings from the Victorian era, and even the modern day. The earliest set of misericords can be found in the choir stalls of Exeter Cathedral and date from the middle of the thirteenth century. The vast majority of English misericords date from the fourteenth and fifteenth centuries and are curiously most often depictions of secular or pagan images and scenes, entirely at odds with the Christian iconography and aesthetic of the churches they sit within.

Many of the stalls with misericords were once part of monastic or collegiate churches, but with the coming of the Reformation many were either destroyed or broken up to be dispersed amongst parish churches. Those that survived were subject to further depletion at the hands of the seventeenth century iconoclasts and the Victorian reformers (one set at Chester being destroyed by Dean Howson because they were deemed improper, although 43 of the original medieval scenes still remain. The woodcarvers came from Lincoln in the late 14th century and moved on to Westminster Hall when they had finished the quire, three years later. It is said that it was the apprentices who were allowed to carve the seats, while the masters did the more impressive works).

Others have been destroyed by fire or by natural decay. Fortunately there are many hundreds left. There are a particularly fine set of original fifteenth century misericords beneath the choir stalls in St Botolph's church, Boston, Lincolnshire, also known as The Stump

As the 'hidden' position and 'vernacular' iconography of misericords have prompted them to be seen as a subversive art-form, they have re-appeared as motifs in modern art and literature [see 'Misericords for Ninevah', Freeman 2009].

More orthodoxly they are found to this day on kathismata, the choir stalls used by Eastern Orthodox monastics. These tend to be much simpler than their Western counterparts, being usually a simple strip of rounded wood with little or no ornamentation. Their use is very common in the Greek Orthodox Church, though Russian Orthodox monasteries tend not to have individual choir stalls, but simple benches for the brethren to sit on. Orthodox Christians stand throughout the long divine services, rather than sit or kneel, though some seating is provided for the elderly and infirm. Whereas Greek monks will tend to lean in their stalls during the services, Russian monks usually stand upright.

With the seat on the left lifted, the misericord provides a ledge which supports the user.
EdlesboroughS02.jpg
Misericord in St. Mary's Church, Buckinghamshire. 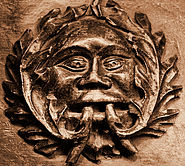