The miraculous catch of fish refers to two miracles attributed to Jesus in the early Christian canonical literature known as the Gospels. The miracles are reported as taking place years apart from each other, but in both miracles apostles are fishing unsuccessfully in the Sea of Galilee when Jesus tells them to try one more cast of the net, at which they are rewarded with a great catch (or "draught", as in "haul" or "weight"). Either is thus sometimes called a "miraculous draught of fish".

In the Gospel of Luke, the first miraculous catch of fish takes place early in the ministry of Jesus and results in Peter as well as James and John, the sons of Zebedee, joining Jesus vocationaly as disciples.[1][2][3][4]

The second miraculous catch of fish is also called the "miraculous catch of 153 fish," and seems to recall the first catch. It is reported in the last chapter of the Gospel of John (21:1-14) and takes place after the Resurrection of Jesus.[5][6][7][8][9]

In Christian art, the two miracles are distinguished by the fact that in the first miracle Jesus is shown sitting in the boat with Peter, while in the second miracle he is standing on the shore.

According to the Gospel of Luke,[1] on the day of this miracle, Jesus was preaching near the Lake of Genesareth (Sea of Galilee), when he saw two boats at the water's edge. Boarding the one belonging to Simon (Peter), and moving out a little from shore, he sat and taught the people from the boat. Afterwards, he said to Peter:

"Put out into deep water, and let down the nets for a catch."[1]

"Master, we've worked hard all night and haven't caught anything. But because you say so, I will let down the nets."[1]

When they had done so, "they caught such a large number of fish that their nets began to break,"[1] requiring help from another boat. When Peter saw the large catch, which filled both boats almost to sinking point, he fell at Jesus' knees and said, "Go away from me, Lord; I am a sinful man!"[1] Jesus responded "Don't be afraid; from now on you will catch men,"[1] after which Peter and his partners James and John left everything and followed Jesus.

According to the Gospel of John,[5] seven of the disciples – Peter, Thomas, Nathanael, the sons of Zebedee (James and John), and two others – decided to go fishing one evening after the Resurrection of Jesus, but caught nothing that night. Early the next morning, Jesus (whom they had not recognised) called out to them from the shore:

When they reply in the negative (the question in Greek uses a particle which expects the answer "No"[10][11]), Jesus responds: "Throw your net on the right side of the boat and you will find some."[5] After doing so, "they were unable to haul the net in because of the large number of fish."[5]

Realising the identity of their advisor, the disciple whom Jesus loved said to Peter, "It is the Lord!,"[5] at which Peter jumped into the water to meet him (an aspect of the story often illustrated in Christian art), while the remaining disciples followed in the boat, towing the net, which proved to be full of 153 large fish.[5] Jesus then cooked and ate some of the fish with the disciples.

This passage has traditionally been one of the liturgical readings following Easter, and sermons have been preached on it by Augustine of Hippo[12] and John Chrysostom,[13] among others.

The precision of the number of fish as 153 has long been considered, and various writers have argued that the number 153 has some deeper significance, with many conflicting theories having been offered (see the discussion on the number 153 in the Bible). Discussing some of these theories, theologian D. A. Carson suggests that "If the Evangelist has some symbolism in mind connected with the number 153, he has hidden it well,"[14] while other scholars note "No symbolic significance for the number of 153 fish in John 21:11 has received widespread support."[15]

References to aspects of the miracle, or to the general idea of being "fishers of men," can sometimes be recognised by uses of the number 153. For example, St Paul's School in London was founded in 1512 by John Colet to teach 153 poor men's children.[16] 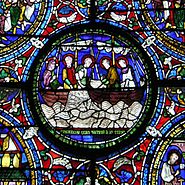 Some or all of this article is forked from Wikipedia. The original article was at Miraculous catch of fish. The list of authors can be seen in the page history.