The menorah (Hebrew: מְנוֹרָה‎), is a seven-branched candelabrum which has been a symbol of Judaism for almost 3000 years and is the emblem of Israel. It was used in the ancient Holy Temple in Jerusalem. Lit by olive oil in the Tabernacle and the Temple, the menorah is one of the oldest symbols of the Jewish people. It is said to symbolize the burning bush as seen by Moses on Mount Horeb (Exodus 3).

(Parshat Terumah) Exodus 25:31-40 lists the instructions for the construction of the menorah used in the temple:

The Menorah is also a symbol closely associated with the Jewish holiday of Hanukkah. According to the Talmud, after the desecration of the Jewish Temple in Jerusalem, there was only enough sealed (and therefore not desecrated) consecrated olive oil left to fuel the eternal flame in the Temple for one day. Miraculously, the oil burned for eight days which was enough time to make new pure oil. The Hanukkah menorah therefore has eight main branches, plus a ninth branch set apart for the Shamash (servant) light which is used to start the other lights. This type of menorah is called a hanukiah in Modern Hebrew.

The Torah states that God revealed the design for the menorah to Moses. The branches are often artistically depicted as semicircular, but Rashi[1] and Maimonides[2] (according to his son Avraham)[3] held that they were straight; no other Jewish authority expresses an opinion on the subject.[4] Archaeological evidence, however, including depictions by artists who had actually seen the menorah itself, indicates that they were neither straight nor semicircular but elliptical.[5]

The shape of the menorah bears a certain resemblance to that of Salvia palaestina.[6]

The original menorah was made for the Tabernacle, and is recorded as being present until the Jordan was crossed. When the Tabernacle is pitched in Shiloh (Joshua 18:1), it is safe to assume that the menorah was also present. However, no mention is made of it during the years that the ark of the covenant was moving about the land in the times of Samuel and Saul. Indeed, there is no further mention at all of the menorah, even in Solomon's temple, as he creates ten candlesticks (2%20Chronicles 4:7). These are definitely recorded as being taken away to Babylon by the invading armies under the general Nebuzar-Adan (Jeremiah 52:19) some centuries later.

During the restoration of worship after the captivity in Babylon, no mention is made of the return of the menorah or of any of Solomon's candlesticks, but only of "vessels" (Ezra 1:9-10). Since however the Temple was an enclosed place with no natural light, some means of illumination must have existed.

Although apocryphal, the Maccabees record that Antiochus Epiphanes took away the candlesticks (plural) when he invaded and robbed the temple as it was in those days (1%20Maccabees 1:21). The later record of the making of "new holy vessels" may refer to the manufacture of new candlesticks (1%20Maccabees 4:49). There is thereafter no Biblical track of the fate of the menorah.

The fate of the menorah used in the Second Temple is recorded by the Jewish historian Flavius Josephus, who states that it was brought to Rome and carried along during the triumph of Vespasian and Titus. A depiction of this event is preserved on the Arch of Titus that still stands today in Rome. This frieze is the best known image of what the menorah in the Temple looked like. As such it is this depiction of the Menorah which appears on Israel's Coat of Arms. 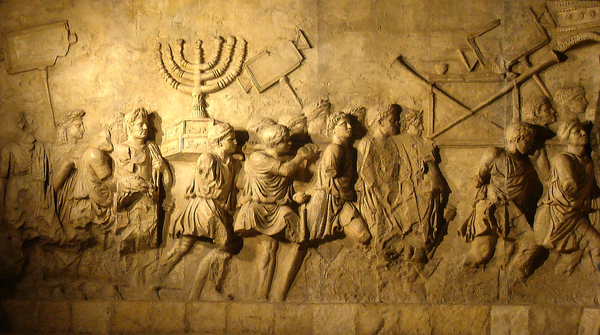 The menorah probably remained in the Temple of Peace in Rome until the city was sacked. The first sacking was by the Visigoths under Alaric I in 410 CE.

Most likely, the menorah was looted by the Vandals in sacking of Rome in 455 CE, and taken to their capital, Carthage.[7] The Byzantine army under General Belisarius might have removed it in 533 and brought it to Constantinople. According to Procopius, it was carried through the streets of Constantinople during Belisarius' triumphal procession. Procopius adds that the object was later sent back to Jerusalem where there is no record of it, although it could have been destroyed when Jerusalem was pillaged by the Persians in 614.

Many synagogues display either a Menorah or an artistic representation of a menorah. In addition, synagogues feature a continually-lit lamp in front of the Ark, where the Torah scroll is kept. Called the ner tamid, this lamp represents the continually-lit menorah used in Temple times. A menorah appears in the coat of arms of the State of Israel (and also the Knesset Menorah) based on the depiction of the Menorah on the Arch of Titus in Rome, Italy.

The kinara is also, like the menora, a seven-branch candleholder which is associated with the African American festival of Kwanzaa. One candle is lit on each day of the week-long celebration, in a similar manner as the Hanukiah (which was modeled after the menora) during Hanukkah.