Religion Wiki
Register
Don't have an account?
Sign In
Advertisement
in: Templates with transitional syntax, Articles with content from Wikipedia, Latter Day Saint movement,
and 2 more

The Latter Day Saint movement is a group of Restorationist religious denominations and adherents who follow at least some of the teachings and revelations of Joseph Smith, Jr., publisher of the Book of Mormon in 1830. The Latter Day Saint movement is one of a number of separate movements, known collectively as Restorationism, intending to transcend Protestant denominationalism, and to restore a form of Christianity thought to be more consistent with the New Testament. The original church, founded by Joseph Smith, Jr., was known initially as the Church of Christ, then the Church of the Latter Day Saints to distinguish it from other Christian churches, and by 1838 as the Church of Jesus Christ of Latter Day Saints. After Smith's death in 1844, the organization divided into several groups, the largest of which, The Church of Jesus Christ of Latter-day Saints (LDS Church) migrated to Utah Territory and became known in the 19th century for its practice of plural marriage. The LDS Church officially renounced this practice in 1890 and discontinued it completely in the early 20th century. Other denominations, who refer to themselves as Mormon fundamentalists, continued the practice.

Other groups originating within the Latter Day Saint movement followed different paths in Missouri, Illinois, Michigan, and Pennsylvania. For the most part these groups rejected plural marriage and some of Smith's latest teachings. The largest of these, the Community of Christ (originally known as the Reorganized Church of Jesus Christ of Latter Day Saints), was formed in Illinois in 1860 by several groups uniting around Smith's son, Joseph Smith III. Most denominations existing today who follow the teachings of Joseph Smith, Jr. have some historical relationship with the movement.

The driving force behind and founder of the early Latter Day Saint movement was Joseph Smith, Jr., and to a lesser extent, during the movement's first two years, Oliver Cowdery. Throughout his life Joseph Smith shared and later wrote on a number of occasions of an experience he had as a boy having seen God the Father and Jesus Christ, as two separate beings, who told him that the true church had been lost and would be restored through him, and he would be given the authority to organize and lead the true Church of Christ. Smith and Cowdery also explained that the angels John the Baptist, Peter, James and John visited them in 1829 and gave them authority to reestablish the Church of Christ.

In 1844, William Law and several other Latter Day Saints in church leadership positions publicly denounced Joseph Smith's secret practice of polygamy in the controversial Nauvoo Expositor, and formed their own church. The Nauvoo city council subsequently had the Expositor destroyed, a practice that had previously been used against Latter Day Saints. In spite of Smith's later offer to pay damages for destroyed property, critics of Joseph Smith and the Church considered the destruction heavy-handed. Some called for the Mormons to be either expelled or destroyed. Following Smith's death by a mob in Carthage, Illinois, some prominent members of the church claimed to be Smith's legitimate successor resulting in a succession crisis, in which the majority of church members followed Brigham Young's leadership; others followed Sidney Rigdon. The crisis resulted in several permanent schisms as well as the formation of occasional splinter groups, some of which no longer exist. These various groups are occasionally referred to under two geographical headings: "Prairie Saints" (those that remained in the Midwest United States) and "Rocky Mountain Saints" (those who followed Brigham Young to what would later become the state of Utah).

Today, there are many schism organizations who regard themselves as a part of the Latter Day Saint movement, though in most cases they do not acknowledge the other branches as valid and regard their own tradition as the only correct and authorized version of Smith's church. The vast majority of Latter Day Saints belong to the largest denomination, The Church of Jesus Christ of Latter-day Saints which claims 13 million members worldwide. The second-largest denomination is the Community of Christ, which reports over 250,000 members. The third largest is The Church of Jesus Christ, with fewer than 13,000 adherents. 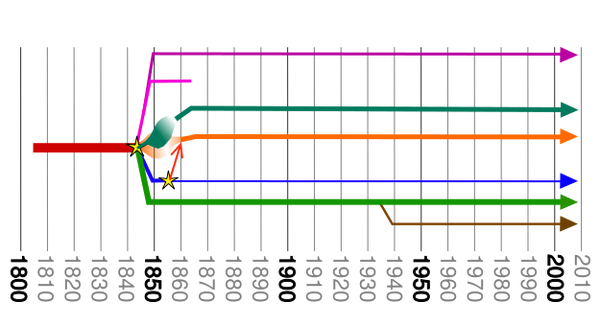