Judensau (German for "Jews' sow") is a derogatory and dehumanizing image of Jews in obscene contact with a large sow (female pig), which in Judaism is an unclean animal, that appeared during the 13th century in Germany and some other European countries. Its popularity lasted for over 600 years and was revived by the Nazis.

The prohibition of pork comes from Torah, in the book Leviticus, Chapter 11, verses 2 through 8, and the arrangement of Jews surrounding, suckling, and having intercourse with the animal (sometimes regarded as the devil), is a mockery of Judaism and example of antisemitic propaganda. The image appears in the Middle Ages, mostly in carvings on church or cathedral walls, often outside where it could be seen from the street (for example at Wittenberg and Regensberg), but also in other forms. The earliest appearance seems to be on the underside of a wooden choir-stall seat in Cologne Cathedral, dating to about 1210. The earliest example in stone dates to ca. 1230 and is located in the cloister of the cathedral at Brandenburg. In about 1470 the image appeared in woodcut form, and thereafter was often copied in popular prints, often with antisemitic commentary. A wall painting on the bridge tower of Frankfurt am Main, constructed between 1475 and 1507 near the gateway to the Jewish ghetto and demolished in 1801, was an especially notorious example and included a scene of the ritual murder of Simon of Trent.[1]

As an unrelated development, during the Nazi period, Judensau was used as an insulting appellation in German. Although this word is identical in form to the name of the image, it is historically separate and morphologically opposite, and translates as "Jewish sow" rather than "Jews' sow".

Vom Schem Hamphoras was a book written by Martin Luther in 1543 which made reference to the Judensau sculpture at Wittenberg:

Here in Wittenberg, in our parish church, there is a sow carved into the stone under which lie young pigs and Jews who are sucking; behind the sow stands a rabbi who is lifting up the right leg of the sow, raises behind the sow, bows down and looks with great effort into the Talmud under the sow, as if he wanted to read and see something most difficult and exceptional; no doubt they gained their Shem Hamphoras from that place...

Some of these sculptures can be found at some churches today.

Judensau at the Cathedral of Brandenburg

Judensau on the Cathedral of St. Martin in Colmar

Judensau on the Cathedral in Heilsbronn

Judensau at the Cathedral of St. Peter in Regensburg

Judensau at the minster in Wimpfen

Judensau on the Wittenberg Parish Church, cited by Luther 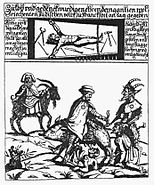 Woodcut of the Bridge Tower at Frankfurt, showing martyrdom of Simon of Trent above a Judensau

Illustration from a Swiss book (1822)