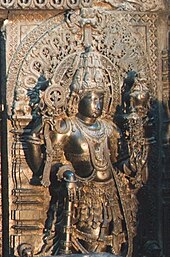 Jaya-Vijaya guarding the sanctum of the Vishnu temple, Chennakesava Temple.

Jaya and Vijaya are the two demigod gatekeepers (Dvarapala) of the abode of Vishnu, known as Vaikuntha (meaning place of eternal bliss).[1][2]

Curse of the four Kumaras

According to a story from Bhagavata Purana, the Four Kumaras, Sanaka, Sanandana, Sanatana, and Sanatkumara who are the manasputras of Brahma (sons born from the mind or thought power of Brahma), visited Vaikuntha, the abode of Vishnu, to see him.

Due to the strength of their tapas, the four Kumaras appear to be mere children, though they are of great age. Jaya and Vijaya, the gate keepers of the Vaikuntha interrupt the Kumaras at the gate, thinking them to be children. They also tell the Kumaras that Sri Vishnu is resting and that they cannot see him now. The enraged Kumaras replied Jaya and Vijaya that Vishnu is available for his devotees any time, and cursed both the keepers Jaya and Vijaya, that they would have to give up their divinity, be born as mortals on Earth (bhuloka, or physical plane), and live like normal human beings. Vishnu appeared before them, and the gatekeepers requested Vishnu to lift the curse of the Kumaras. Vishnu says curse of Kumaras cannot be reversed. Instead, he gives Jaya and Vijaya two options. The first option is to take seven births on Earth as a devotee of Vishnu, while the second is to take three births as his enemy. After serving either of these sentences, they can re-attain their stature at Vaikuntha and be with him permanently. Jaya and Vijaya cannot bear the thought of staying away from Vishnu for seven lives. As a result, they choose to be born three times on Earth even though it would have to be as enemies of Vishnu. (This story is also used as a metaphor about the cost of committing transgressions in "The Gospel of Sri Ramakrishna".)

In the first life they were born as Hiranyakashipu and Hiranyaksha in the Krita Yuga, to Diti (daughter of Daksha Prajapathi) and sage Kashyapa who were killed by Vishnu taking the form of Varaha, a boar and Narasimha,a man-lion in the Satya Yuga.

In their second life they were born as Ravana and Kumbhakarna and were killed by Vishnu who descended as Rama in the Treta Yuga.

And in their third life as Shishupala and Dantavakra who were killed by Vishnu who descended as Krishna in the Dwapara Yuga.

It has been noted by many that the strengths of Jaya and Vijaya gradually declined with each subsequent birth. Vishnu needed one avatar each to kill Hiranyaksha and Hiranyakashipu. Born as Rama he was able to vanquish both Ravana and Kumbhakarna. In his Krishna avatar the killing of Shishupala and Danthavakra is not the main focus but more to reduce the 'Bhoobhara" (The burden on mother earth by too many sinners).

In the modern era, known in Sanskrit as the Kali Yuga, Jaya and Vijaya are free from their curse, and they can be seen as gatekeepers in Vishnu temples and temples affiliated with Vaishnavism. Statues of Jaya-Vijaya stand in the temple of Venkateswara in Tirumala, the temple of Jagannath in Puri, and the temple of Ranganatha in Srirangam.