View source
watch 01:36
We're Getting Mutants in the MCU - The Loop
Do you like this video?
Play Sound
"Heavenly Father" redirects here. For the recurring theme in mythology, see sky father.

God the Father is the title and attribution given to God in many monotheist religions. In the Israelite religion and its closest modern relative, Talmudic Judaism, God is called Father because he is the creator, law-giver, and protector.[1] In Christianity, God is called Father not only for the same reasons, but because of the mystery of the Father-Son relationship revealed by Jesus Christ.[2]

In general, the name Father signifies that he is the origin of what is subject to him, a supreme and powerful authority and protector. Moreover, God the Father is viewed as immense, omnipotent, omniscient, omnipresent with infinite power and charity that goes beyond human understanding.[3] For instance, after completing his monumental work Summa Theologica, St. Thomas Aquinas concluded that he had not yet begun to understand God the Father.[4]

Masculine characteristics are often ascribed to God, in the Scriptures and traditions of many monotheists. God is also usually defined as being a spirit, and thus having no biological gender. For instance, the Catechism of the Catholic Church #239 specifically states that "God is neither man nor woman: he is God".[5][6] Yet, God is at times thought of as dominant, powerful, fatherly, passionate, whose ways are too high for his children to understand; feminine imagery is also found in the Bible [7]. God is traditionally referred to by the masculine pronoun he (often capitalized; He).

In modern monotheist religious traditions, such as Bahá'í, Christianity, Judaism, Krishnaism and Vaishnavism, God is addressed as the father, in part because of his active interest in human affairs, in the way that a father would take an interest in his children who are dependent on him and as a father, he will respond to humanity, his children, acting in their best interests.[8] Many monotheists believe they can communicate with him through prayer, and improve their relationship with him.[9]

At times, it is also expected that God may punish those who err like a father punishes his children, e.g. as stated in the Old Testament: "Endure hardship as discipline; God is treating you as sons. For what son is not disciplined by his father? If you are not disciplined (and everyone undergoes discipline), then you are illegitimate children and not true sons." [Heb. 12:8]

Unlike Christianity, Islam does not have a separation between Father, Son and Holy Spirit and simply views God as the unique creator and ruler of the universe.[10]

In Christianity, God is called "Father" in a more literal sense, besides being the creator and nurturer of creation, and the provider for his children.[Heb 1:2-5] [Gal 4:1-7] The Father is said to have an eternal relation to his only begotten son, Jesus Christ, which implies an exclusive and intimate familiarity: "No one knows the Son except the Father, and no one knows the Father except the Son and any one to whom the Son chooses to reveal him."[Mt. 11:27] In Christian theology, this is the revelation of a sense in which fatherhood is inherent to God's nature, an eternal relationship.[cf. Jn 17]

In the third century, Tertullian claimed that God exists as the Father, the Son, and the Holy Spirit—the three personae of one and the same substance.[11] To trinitarian Christians (which include Catholic Christians, Eastern Orthodox Christians, and most but not all Protestant denominations), God the Father is not at all a separate god from the Son (of whom Jesus is the incarnation) and the Holy Spirit, the other Hypostases of the Christian Godhead.[11]

According to the Nicene Creed, the Son (Jesus Christ) is "eternally begotten of the Father", indicating that their divine Father-Son relationship is not tied to an event within time or human history. See Christology.

However, there is a deeper sense in which Christians believe that they are made participants in the eternal relationship of Father and Son, through Jesus Christ. Christians call themselves adopted children of God:

But when the fullness of the time had come, God sent forth His Son, born of a woman, born under the law, to redeem those who were under the law, that we might receive the adoption as sons. And because you are sons, God has sent forth the Spirit of His Son into your hearts crying out, "Abba, Father!" Therefore you are no longer a slave but a son, and if a son, then an heir of God through Christ.

The Gospel of Mark records that Jesus used the term Abba when praying to God the Father during his Agony in the Garden of Gethsemane shortly before his crucifixion, saying: "Abba, Father, all things are possible to you; remove this cup from me. Yet not what I want, but what you want."[Mk 14:36] Here is the fervent appeal of a son to a beloved father, followed quickly by an assurance that, in any event, he would remain obedient.

In Judaism, God is called "Father" with a unique sense of familiarity. In addition to the sense in which God is "Father" to all men because he created the world (and in that sense "fathered" the world), the same God is also uniquely the patriarchal law-giver to the chosen people. He maintains a special, covenantal father-child relationship with the people, giving them the Shabbat, stewardship of his oracles, and a unique heritage in the things of God, calling Israel "my son" because he delivered the descendants of Jacob out of slavery in Egypt[Hosea 11:1] according to his oath to their father, Abraham. To God, according to Judaism, is attributed the fatherly role of protector. He is called the Father of the poor, of the orphan and the widow, their guarantor of justice. He is also called the Father of the king, as the teacher and helper over the judge of Israel.

In many polytheistic religions, one or more gods is thought to be a leader and a father of other gods, or of humanity. The classical example from Indo-European mythology is Dyeus, with an epithet "father" e.g. in Roman religion as Iuppiter, and in Vedic religion, as Dyaus Pita. In Egyptian religion, jt-nṯr "god father" was an epithet of Thot.

God the Father in Western art 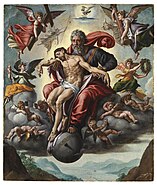 Crowning of the Virgin by Rubens, 17th century