This is an incomplete list, which may never be able to satisfy certain standards for completion. You can help by expanding it with reliably sourced additions.

This is the glossary of Japanese Buddhism, including major terms the casual (or brand-new) reader might find useful in understanding articles on the subject. Words followed by an asterisk (*) are illustrated by an image in one of the photo galleries. Within definitions, words set in boldface are defined elsewhere in the glossary.

Gallery: A to G

A statue of an arakan at Kita-in

A statue of Enma 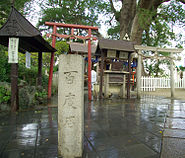 Gallery: I to K

A jizō with a votive bib and a woolen hat

Jizō, each representing a lost child

The Jūroku Rakan, or Sixteen Arhats

A manji-shaped pond at a Buddhist temple

In present day Japanese, sotoba usually has the latter meaning.

Pagoda at Yakushi-ji in Nara

A saisenbako, or offertory box

A high rank, five-bay sanmon at Nanzen-ji. Note the sanrō.

A low rank sanmon at Sozen-ji in Osaka 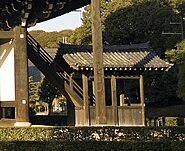 A sekitō, or stone pagoda

Statue of Nichiren guarded by the Shi Tennō

A large sōrin (metal spire) on top of a tahōto 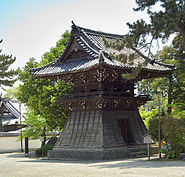 A later type of shōrō