This wiki's URL has been migrated to the primary fandom.com domain.Read more here

History of use of the symbol

The cross-shaped sign, represented in its simplest form by a crossing of two lines at right angles, greatly antedates, in both East and West, the introduction of Christianity. It goes back to a very remote period of human civilization. It is supposed to have been used not just for its ornamental value, but also with religious significance.[1]

Some have sought to attach to the widespread use of this sign, in particular in its swastika form, a real ethnographic importance. It may have represented the apparatus used in kindling fire, and thus as the symbol of sacred fire [2] or as a symbol of the sun,[3] denoting its daily rotation. It has also been interpreted as the mystic representation of lightning or of the god of the tempest, and even the emblem of the Aryan pantheon and the primitive Aryan civilization.

Another symbol that has been connected with the cross is the ansated cross (ankh or crux ansata) of the ancient Egyptians, which often appears as a symbolic sign in the hands of the goddess Sekhet, and appears as a hieroglyphic sign of life or of the living.[4] In later times the Egyptian Christians (Copts), attracted by its form, and perhaps by its symbolism, adopted it as the emblem of the cross (Gayet, "Les monuments coptes du Musée de Boulaq" in "Mémoires de le mission française du Caire", VIII, fasc. III, 1889, p. 18, pl. XXXI–XXXII & LXX–LXXI).

In the Bronze Age we meet in different parts of Europe a more accurate representation of the cross, as conceived in Christian art, and in this shape it was soon widely diffused. This more precise characterization coincides with a corresponding general change in customs and beliefs. The cross is now met with, in various forms, on many objects: fibulas, cinctures, earthenware fragments, and on the bottom of drinking vessels. De Mortillet is of opinion that such use of the sign was not merely ornamental, but rather a symbol of consecration, especially in the case of objects pertaining to burial. In the proto-Etruscan cemetery of Golasecca every tomb has a vase with a cross engraved on it. True crosses of more or less artistic design have been found in Tiryns, at Mycenæ, in Crete, and on a fibula from Vulci.

The material in this section is a slightly abbreviated copy of text in the public-domain Catholic Encyclopedia reproduced in full in Wikisource.

During the first two centuries of Christianity, the cross may have been rare in Christian iconography, as it depicts a purposely painful and gruesome method of public execution. The Ichthys, or fish symbol, was used by early Christians. The Chi-Rho monogram, which was adopted by Constantine I in the fourth century as his banner (see labarum), was another Early Christian symbol of wide use.

However, the cross symbol was already associated with Christians in the second century, as is indicated in the anti-Christian arguments cited in the Octavius of Minucius Felix, chapters IX and XXIX, written at the end of that century or the beginning of the next,[5] and by the fact that by the early third century the cross had become so closely associated with Christ that Clement of Alexandria, who died between 211 and 216, could without fear of ambiguity use the phrase τὸ κυριακὸν σημεῖον (the Lord's sign) to mean the cross, when he repeated the idea, current as early as the apocryphal Epistle of Barnabas, that the number 318 (in Greek numerals, ΤΙΗ) in Genesis 14:14 was interpreted using numerology as a foreshadowing (a "type") of the cross (T, an upright with crossbar, standing for 300) and of Jesus (ΙΗ, the first two letter of his name ΙΗΣΟΥΣ, standing for 18),[6] and his contemporary Tertullian could designate the body of Christian believers as crucis religiosi, i.e. "devotees of the Cross".[7] In his book De Corona, written in 204, Tertullian tells how it was already a tradition for Christians to trace repeatedly on their foreheads the sign of the cross.[8]

The cross as a Christian symbol or "seal" came into use at least as early as the second century (see "Apost. Const." iii. 17; Epistle of Barnabas, xi.-xii.; Justin, "Apologia," i. 55-60; "Dial. cum Tryph." 85-97); and the marking of a cross upon the forehead and the chest was regarded as a talisman against the powers of demons (Tertullian, "De Corona," iii.; Cyprian, "Testimonies," xi. 21–22; Lactantius, "Divinæ Institutiones," iv. 27, and elsewhere). Accordingly the Christian Fathers had to defend themselves, as early as the second century, against the charge of being worshipers of the cross, as may be learned from Tertullian, "Apologia," xii., xvii., and Minucius Felix, "Octavius," xxix. Christians used to swear by the power of the cross (see Apocalypse of Mary, viii., in James, "Texts and Studies," iii. 118).

In Christianity the cross reminds Christians of God's act of love in Christ's sacrifice at Calvary—"the Lamb of God who takes away the sin of the world." The cross also reminds Christians of Jesus' victory over sin and death, since it is believed that through His death and resurrection He conquered death itself. They venerate it not as a material object seen in isolation but as the symbol of the sacrifice by which Christ saved them, as the instrument of Christ's triumph, according to Colossians 2:15 ("Having disarmed the powers and authorities, he made a public spectacle of them, triumphing over them by the cross"),[9] and "as the instrument of our God's saving Love".[10]

Roman Catholics, Eastern Orthodox, Oriental Orthodox, members of the major branches of Lutheranism, some Anglicans, and other Christians often make the sign of the cross upon themselves. This was already a common Christian practice in the time of Tertullian.[11]

The Feast of the Cross is an important Christian feast. One of the twelve Great Feasts in Eastern Orthodoxy is the Exaltation of the Cross on September 14, which commemorates the consecration of the basilica on the site where the original cross of Jesus was reportedly discovered in 326 by Helena of Constantinople, mother of Constantine the Great. The Catholic Church celebrates the feast on the same day and under the same name (In Exaltatione Sanctae Crucis), though in English it has been called the feast of the Triumph of the Cross.

Roman Catholic, Eastern Orthodox and Anglican bishops place a cross [+] before their name when signing a document. A cross [†] may also be placed before the name of a departed Christian when their name appears in print.

Forms of the Cross

The cross is often shown in different shapes and sizes, in many different styles. It may be used in personal jewelry, or used on top of church buildings. It is shown both empty and in crucifix form, that is, with a figure of Christ, often referred to as the corpus (Latin for "body"), affixed to it. Roman Catholic, Anglican and Lutheran depictions of the cross are often crucifixes, in order to emphasize that it is Jesus that is important, rather than the cross in isolation. Many Protestant traditions depict the cross without the corpus, interpreting this form as an indication of belief in the resurrection rather than as representing the interval between the death and the resurrection of Jesus.

Crosses are a prominent feature of Christian cemeteries, either carved on gravestones or as sculpted stelas. Because of this, planting small crosses is sometimes used in countries of Christian culture to mark the site of fatal accidents, or to protest alleged deaths.

In Catholic countries, crosses are often erected on the peaks of prominent mountains, such as the Zugspitze or Mount Royal, so as to be visible over the entire surrounding area.

Forms of the Christian cross include:

For further information on the forms in which the cross is represented, including its heraldric use, see the article Cross.

The Dagger symbol also represents the Christian cross. In Unicode, it is U+2020(†).

Here are some examples of crosses:

A cross overlooking a town 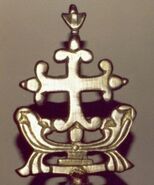 The Millennium Cross in Skopje, the biggest cross in the world