Allegory is a device in which characters or events represent or symbolize ideas and concepts. Allegory has been used widely throughout the history of art, and in all forms of artwork. A reason for this is that allegory has an immense power of illustrating complex ideas and concepts in a digestable, concrete way. In allegory a message is communicated by means of symbolic figures, actions or symbolic representation. Allegory is generally treated as a figure of rhetoric; a rhetorical allegory is a demonstrative form of representation conveying meaning other than the words that are spoken.

As a literary device, an allegory in its most general sense is an extended metaphor. Plato wrote an allegory called "The Cave Allegory", and as literary allegories go, possibly none have been more influential on Western philosophy. A group of men are chained up in a cave, facing the wall, unable to turn around and look behind them. Behind them, in the middle of the cave, is a roaring fire, and when things move in front of the fire shadows are projected onto the wall in front of their faces, and the men see these shadows, but, ignorant as they are, take the shadows for reality, and go about their lives in a fool's paradise. But one day, one of the men frees himself from his chains, and sees that the shadows are not real but are only substanceless representations of the real things. Plato had an idea called the "Theory of Forms". The basic idea is: the world that we know is a shadow of something else. This "something else" is the form of the world, or the essence of the world, or the world in its purest form. Not just anyone can know or understand forms, only philosophers could, according to Plato. The path to becoming a philosopher was one of illumination, quite literally, if we remember the Cave Allegory. The cave is ignorance, the shadows are the world that "ordinary men" perceive, and the free-man is the philosopher who has found true knowledge by seeing the fire and by stepping into the light outside. Plato has used allegory to illustrate a very complex philosophical idea.

First attested in English in 1382, the word allegory comes from Latin allegoria, the latinisation of the Greek ἀλληγορία (allegoria), "veiled language, figurative",[1] from ἄλλος (allos), "another, different"[2] + ἀγορεύω (agoreuo), "to harangue, to speak in the assembly"[3] and that from ἀγορά (agora), "assembly".[4]

Northrop Frye discussed what he termed a "continuum of allegory," ranging from what he termed the "naive allegory" of The Faerie Queene, to the more private allegories of modern paradox literature. In this perspective, the characters in a "naive" allegory are not fully three-dimensional, for each aspect of their individual personalities and the events that befall them embodies some moral quality or other abstraction; the allegory has been selected first, and the details merely flesh it out.

Many ancient religions are based on an astrologic allegories, that is, allegories of the movement of the Sun and the Moon as seen from the Earth. Examples include the cult of Horus/Isis.

In classical literature two of the best-known allegories are the cave in Plato's Republic (Book VII) and the story of the stomach and its members in the speech of Menenius Agrippa (Livy ii. 32). In Late Antiquity Martianus Capella organized all the information a fifth-century upper-class male needed to know into an allegory of the wedding of Mercury and Philologia, with the seven liberal arts as guests; Capella's allegory was widely read through the Middle Ages.

Other early allegories are found in the Hebrew Bible, for instance in the extended metaphor in Psalm 80 of the Vine, which is Israel[5] and Ezekiel 16 and 17.[6]

Medieval thinking accepted allegory as having a reality underlying any rhetorical or fictional uses. The allegory was as true as the facts of surface appearances. Thus, the bull Unam Sanctam (1302) presents themes of the unity of Christendom with the pope as its head in which the allegorical details of the metaphors are adduced as facts on which is based a demonstration with the vocabulary of logic: "Therefore of this one and only Church there is one body and one head—not two heads as if it were a monster... If, then, the Greeks or others say that they were not committed to the care of Peter and his successors, they necessarily confess that they are not of the sheep of Christ" (complete text).

In the late 15th century, the enigmatic Hypnerotomachia, with its elaborate woodcut illustrations, shows the influence of themed pageants and masques on contemporary allegorical representation, as humanist dialectic conveyed them.

The denial of medieval allegory as found in the 11th-century works of Hugh of St Victor and Edward Topsell's Historie of Foure-footed Beastes (London, 1607, 1653) and its replacement in the study of nature with methods of categorization and mathematics by such figures as naturalist John Ray and the astronomer Galileo is thought to mark the beginnings of early modern science.[7]

Since meaningful stories are nearly always applicable to larger issues, allegories may be read into many stories, sometimes distorting their author's overt meaning. For instance, many people have suggested that The Lord of the Rings is an allegory for the World Wars, in spite of J. R. R. Tolkien's emphatic statement in the introduction to the second edition, "It is neither allegorical nor topical.... I cordially dislike allegory in all its manifestations, and always have done so since I grew old and wary enough to detect its presence." Where some requirements of "realism", in its flexible meanings, are set aside, allegory can come more strongly to the surface, as in the work of Bertolt Brecht on one hand, or on the other in science fiction and fantasy, where an element of universal application and allegorical overtones are common, as with The Chronicles of Narnia.

Not every resonant work of modern fiction is an allegory. Arthur Miller's The Crucible, for instance, is character-driven historical drama with contemporary relevance, but is not an allegory in spite of its parallels with McCarthyism, linking the hunt for communists in the 1940s and 1950s to the hunt for witches in the late 17th century. L. Frank Baum's The Wonderful Wizard of Oz is plot-driven fantasy narrative in an extended fable with talking animals and broadly-sketched characters. J.R.R. Tolkien's The Lord of the Rings is another example of a work sometimes seen as allegorical yet, as the author explained, is not - rather it is an example of what he referred to as applicability.

Some elaborate and successful specimens of allegory are to be found in the following works, arranged in approximate chronological order: 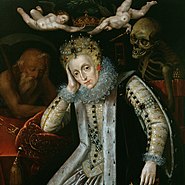 The English School's Allegory of Queen Elizabeth with Father Time at her right and Death looking over her left shoulder. Two cherubs are removing the weighty crown from her tired head.